The making-of the plastic cutlery JOIN

High-quality cutlery has a long-standing tradition in Germany. Back when a full set of silverware made of stainless steel or silver was a must in every dowry, cutlery production was booming at companies such as WMF and Rosenthal. High-end sets made of plastic, however, have always been more of an exception, even in the plastic-crazy 1970s, although a few major designers and renowned companies did try their hand at it. For the most part, it was the handles that were coated with plastic, such as, for example, in the Clip series created by the well-known German designer Peter Raacke. The plastic was intended to make the utensil more comfortable to hold. The three designers from ding3000 studio in Hannover now have developed things further with their plastic cutlery set for the Konstantin Slawinski company with support of BASF's designfabrik. 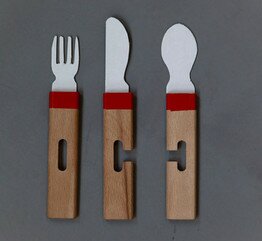 A wodden toy turns into cutlery. 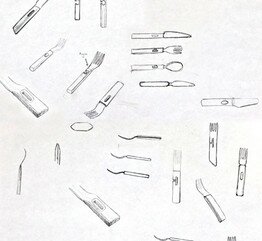 Sketches of the ongoing design process. Initially the cutlery was planned in metal with a plastic handle. 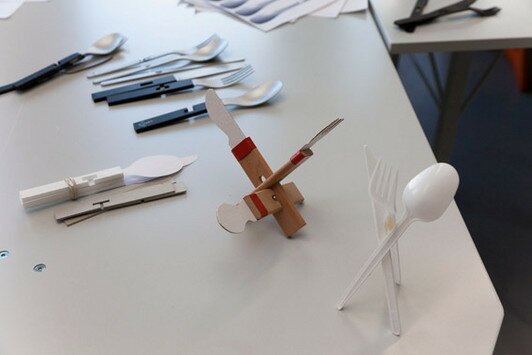 At first, they thought of implementing their invention in stainless steel. But when they presented their cutlery set to the producer Konstantin Slawinski, it quickly became clear that there would be difficulties with a metal version: "There are no small manufacturers on the market. We would have had to approach the major German cutlery producers, but this would have made the cutlery expensive." So they decided to use plastic and to contact BASF's designfabrik in Ludwigshafen for help with the aspects of material selection, approval for contact with food, and production know-how. "I remembered the Myto chair created by Konstantin Grcic, which had been developed with BASF materials and know-how," says Sven Rudolph. If not steel, then at least it had to be a high-grade plastic. After all, it was not the goal to produce disposable cutlery. 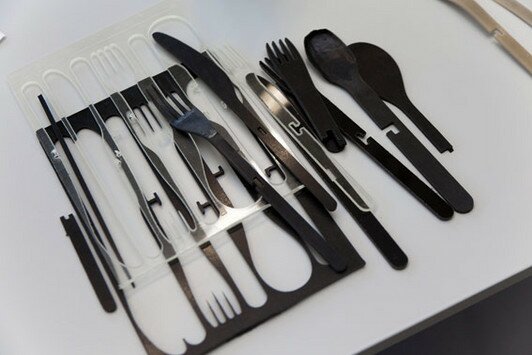 Water-jet machined model made of Ultramid®. 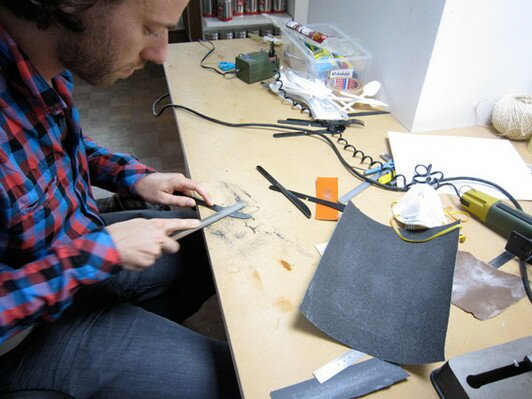 Preparation of the blade for sharpening. 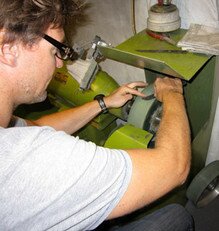 A knife grinder applies the blade edge on a prototype. 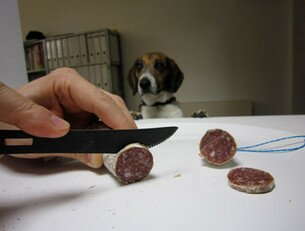 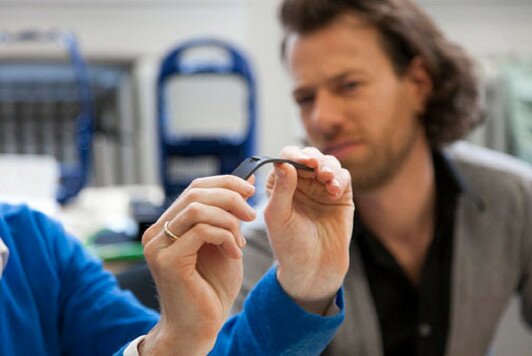 Breaking test of the water-jet machined cutlery out of Ultramid®.

The designfabrik in Ludwigshafen assists designers in selecting and combining plastics from BASF's line-up, and it also provides technical support so that their product ideas can be implemented. One of the designfabrik's employees, Sandra Hermanns, provides her input to remedy any weak spots that might be encountered. "Especially the spoon and the fork, where the notches in the handle greatly impair the stability, have to be made of an extremely strong plastic. Their handles are exposed to a great deal of pressure at the joining line; this is why our specialists recommended the sturdy plastic Ultramid, which was then tested and optimized on a virtual prototype using the Ultrasim simulation tool." And Schelling continues: "Thanks to this sturdy material, we have managed to create filigree utensils with thin walls." In contrast to most plastic forks, the prongs of this fork are very pointed.

The final shape is being refined by further sketches. 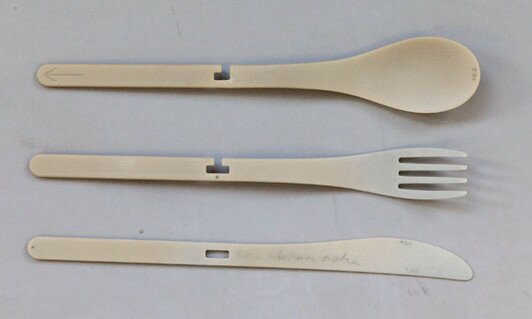 SLS model of the cutlery with remarks. 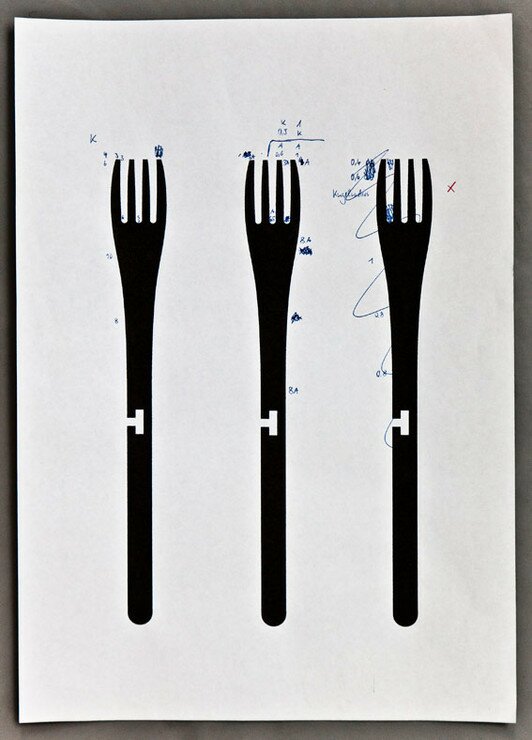 Silhouettes of the fork with remarks for further amendmends. 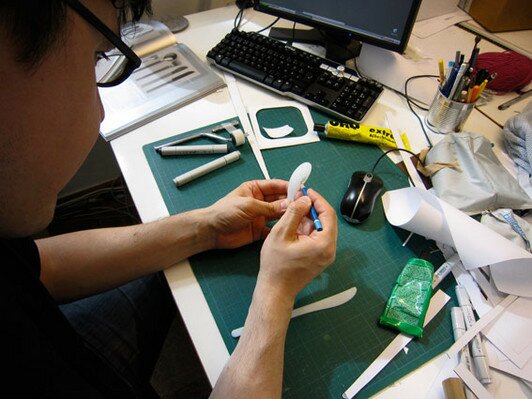 Revising of the spoon on another SLS model. 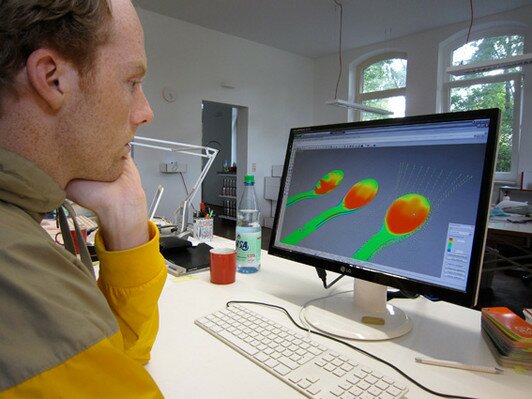 Analyzing and optimizing of the surface of the spoon with the help of a 3D programm.

All that remains is one crucial question: Does a plastic knife really cut well? "Of course," explains Sven Rudolph. "Most of us have already cut ourselves on a sharp plastic edge. The problem is not so much the sharpness. What is much more difficult is to give the blade an attractive and durable serrated edge." This is why the designer sought advice from professional knife sharpeners and visited the German Blade Museum in Solingen in search of the perfect edge. He found that the large serrations of a steak knife very quickly wear down. It does not become dull, but it looks worn out. "The fine fluting that we have now created for the knife will retain its shape, even after prolonged use," says Rudolph. And one thing is for sure: owing to the heat resistance of Ultramid, the edge will not melt away and become dull, which often happens with regular disposable utensils when you cut into a sausage that is hot off the grill. 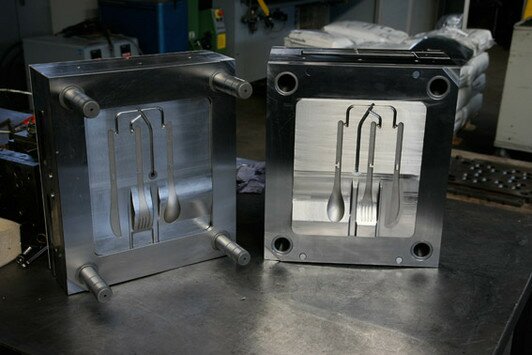 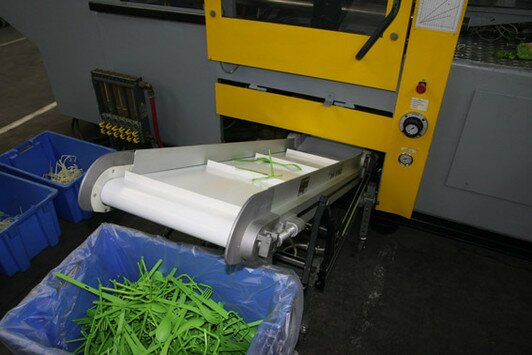 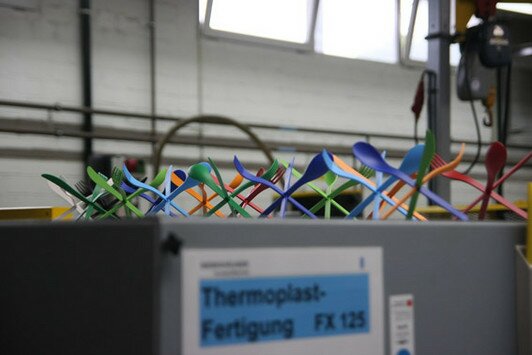